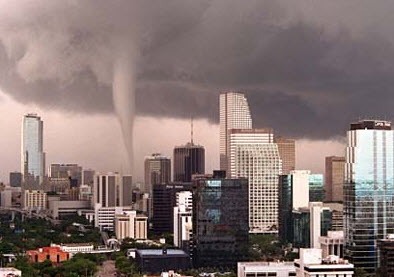 Slashdot recently posted an interesting infographic questioning whether a hurricane or other extreme weather conditions could take down cloud computing and a significant percentage of the internet as a whole.

It is true Amazon AWS (Amazon Web Services) recently experienced cloud computing disruptions and a short cloud service outage. In June of 2012, Amazon AWS customers were impacted when lightening struck causing a regional power failure. As a result of the Amazon AWS cloud computing outage, several high profile sites like Netflix, Pinterest, Reddit, and Instagram were impacted with several hours of down time. You can imagine how even a short cloud outage could dramatically impact this powerful foursome.

This freak accident aside, could bad weather conditions or a huge storm really take down cloud computing and the internet? Anything is possible, but this scenario is highly unlikely.

The infographic does make a good point in it’s reference to Rackspace who:

A disruption to services provided by Rackspace, Amazon AWS, Microsoft Azure, Oracle, and even Salesforce.com could have catastrophic wide-stream impacts, but this is nothing new. Having all of your eggs in a highly concentrated basket is scary for some, but I would rather take my chances with a top-notch data center vs. a homegrown self-managed data center any day.

Think about homegrown data centers and lets use the financial services industry as an example. These guys may be able to mount hardware, run cable, hire fancy electricians to load balance power, setup a few redundant systems, and ensure gigantic air conditioners pump ice cold air into their spotless server rooms, but they are still data center wannabees at the end of the day. They do not eat and breathe this stuff; their bread and butter focus is on business services and products, not technology and server rooms, even if they make every attempt to follow industry standards and disaster recovery plans (DR).

Now think about state-of-the-art data centers. Their entire business model focuses on providing the highest quality environment for hosting data. All company investments and business priorities are aligned to continual improve and perfect the data center experience for their customers. Entire departments are dedicated to business continuation planning, disaster recovery (plans for earthquakes, hurricanes, lightning strikes, torrential rain, and even meteor strikes), data security, facility management, engineering, and the list goes on. Companies like Rackspace eat and breathe everything surrounding the hosting of data. Their livelihood is dependent on it. They do not have unrelated competing priorities. Secure and protected data is their only focus.

Additionally, the world’s top data centers in fact do not place all of their eggs in the same basket. Redundant data center sites setup in separate and distinct disaster zones is a commonly used practice. For example, a company would not have two of it’s data centers located a few miles apart. Rarely are they even contained in the same state. Usually, the two data centers would be strategically positioned to ensure they do not share the same central power grid, seismic zone, and even network backbones. This usually means data center A is located on the West coast while data center B is located on the East coast. In an event where a hurricane or other natural disaster takes out the primary data center, the backup site can quickly and seamlessly step in to ensure there is little to no disruption.

In my opinion, the accountability needs to be shared for any company who hosts their data externally. Outsourcing makes sense, but it is their responsibility to ensure the data center meets their highest standards. They should conduct a physical site review and scrutinize every detail as if they were building the data center on premise themselves. If having both data centers in the United States is “cutting it close”, their solution should focus on data centers who have backups both in the states as well as another country or continent.

How I look at it, if there is a storm large enough to take down the internet, meaning primary and backup sites are simultaneously knocked out, we won’t have to worry about it anyway. World economies would collapse and the “fittest” will survive and weather out the storm… pun intended.

What are your thoughts? Is it possible for a silly hurricane to bring cloud computing and some of the largest companies to their knees, or is this infographic more dramatic than realistic?

The perks of being a home-based  business owner, independent contractor, or freelancer is not having heavy overhead. All you need is a desk, laptop, and wireless router and you now have the tools required to run most home-based businesses. Best of all, you do not require expensive real estate and office space like your competitors…

Year after year, Dreamforce expands in size and becomes increasingly more extravagant. The Dreamforce experience can be a bit overwhelming, but luckily our friends at Salesforce provide great information allowing those of you who are new to Dreamforce to navigate the sessions and events like pros.   Listed below are Dreamforce 2012 freebies, tips, FAQs, and…

Lets be honest. You are attending Dreamforce 2012 this year to learn a few new things and find out what Salesforce.com will release soon, but it is what happens after hours that truly entices you to make the trip. It is not the free beer and liquor that lures you in but rather the “networking…

Type “Dreamforce” in this site’s search bar (top-right corner) and you will see I’ve posted several articles related to Dreamforce 2012. This post is a bit different as it will serve as my personal reference for all Dreamforce after parties, DF events, and places to grab a bite or a beer which surround my hotel,…

Salesforce.com is offering free passes to this year’s Dreamforce 2012 Music Festival. The music lineup will consist of 13 San Francisco-based bands and artists who will be playing at Dreamforce Plaza on Howard Street. The Dreamforce artists selected by Salesforce this year are a diverse mix of funk pop, jazz, blues, indie pop, rock, and various blends…

Can’t make it to Dreamforce 2012 this year? No problem, Salesforce.com is streaming Dreamforce 2012 live this year. All you need to do is RSVP and you will have access to tune in and watch all of the major keynotes, interact with industry leaders and experts via the Salesforce social stream, and best of all, you can…

This site uses Akismet to reduce spam. Learn how your comment data is processed.